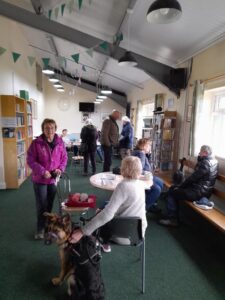 One year ago to that day, North Yorkshire County Council’s library service worked with volunteers who were setting up the library in Goathland Community Hub.

An enthusiastic group of volunteers has been running the village library every Wednesday since, from 10am to 4pm, strengthening their community and providing a social focal point that helps to prevent loneliness and isolation.

The Hub’s Chair of Trustees Keith Thompson said: “Opening the library a year ago achieved one of the main goals behind the development on the Hub, which opened in 2017. It is an essential service and lots of people in the community use it. It is important that they can access these services where they live.

“Most of the people on the team of volunteers are retired and I think this helps to give many of them a sense of community and purpose. All credit goes to Cath Jenkinson, who leads the volunteers, and the people who give their time freely for the benefit of the community.”

The volunteers are inviting new and existing customers to join them on 11 December for a sprinkle of Christmas cheer. Coffee and mince pies will be served between 2.30pm and 4pm. Local school children are regular visitors to the library and will take part in the anniversary celebration. Many of the children undertook this year’s Summer Reading Challenge through the library outlet.

Chrys Mellor, the County Council’s Libraries General Manager, said: “We’re delighted at see the volunteers in Goathland celebrating their first successful year and are pleased to have been able to support them with a collection of books that is regularly refreshed from library stock. This success confirms how libraries are loved and valued by our communities and that people are willing to make the commitment to helping them continue to flourish.”

Volunteer co-ordinator Cath Jenkinson said: “It has been a really successful year and all the volunteers have absolutely loved running their new library. We have members of all ages, from nine months to 94 years. The book stock is changed on a regular basis to give variety to everyone. Word is spreading beyond the village and children from the local school visit and borrow books regularly. Brian, a regular library user, is even baking a special chocolate cake for our party.”

Other benefits have arisen from the opening of the library, among them a jigsaw club, which includes a community jigsaw within the library that anyone can help to complete.

“It becomes a drop-in facility that is open one day a week,” said Keith. “People can have a cup of tea or coffee, they can bring their dogs.”

Another development is a computing course that will start in January, run by the County Council’s adult learning and skills service. This will be ideal for people who are new to computers and those who want to update their skills.

Keith said: “It became apparent that a lot of people who use the library have little knowledge of IT. This stops them doing things they would want to do when living in an isolated community, such as having the groceries delivered, and it puts them at risk of scammers.”

The outlet is the first library in the village since 1966. The original village library was housed in the Reading Room, which opened in June 1894. It was built by public subscription on land donated by the Duchy of Lancaster. Before that, the village Literary and Philosophical Society met in a room above the village post office, but had to leave when the postmaster married and needed the room for his children. When it opened, newspapers and periodicals were limited and were often days or weeks old when they were placed in the Reading Room, membership of which cost 1d (one pre-decimal penny) a week. Those less able could learn to read, meet socially, often playing board games or cards as well as reading. The library closed in 1966, to be replaced by a mobile library service until 2011.

Get tickets
This site uses cookies: Find out more.